U.S. Attorney Steven D. Weinhoeft and FBI Springfield Special Agent in Charge Sean M. Cox reaffirm their commitment to investigating and prosecuting hate crimes in Southern Illinois and urge members of the public to report all incidents where a federal hate crime may have occurred.  A  violent act motivated by bias towards a  person’s actual  or perceived race,  color,  religion,  national origin,  gender,  gender identity,  sexual orientation,  or disability can qualify as a federal hate crime. “Safeguarding the civil rights promised by our laws and the Constitution strikes at the very core of our mission at the Department of Justice,” said U.S. Attorney Weinhoeft. “All violence is condemnable, but violence born from bigotry and hatred leaves especially deep scars – not just on the victims but on all of us. This office will vigorously investigate and prosecute any hate crimes committed in this district. If you or someone you know has been the victim of a federal hate crime, we want to know about it.”

FBI Springfield Special Agent in Charge Sean M. Cox said, “The FBI will not tolerate crimes spurred by hate and intolerance meant to intimidate and isolate targeted groups. Hate crimes are not just an attack on an individual, they are an attack on entire communities where people from all walks of life deserve respect and the ability to live, work, and raise their children without fear. FBI Springfield wants to assure the public we will work diligently to thoroughly investigate any violation of such crimes. We encourage anyone who believes their civil rights have been violated to report it to the FBI.”

All persons with information about a possible federal hate crime are strongly encouraged to contact FBI-Springfield at 217-522-9675.

Today’s call for public assistance comes as the Department of Justice is conducting a 30- day  “expedited review”  to determine how best  to use all the tools at the agency’s disposal to combat hate crimes. The focus is not just on increasing criminal investigations and prosecutions; the Department is also considering ways to improve federal hate crime reporting and tracking, to better utilize civil enforcement authorities to address other unlawful acts of bias and to engage more effectively with victimized communities across the country, among other goals.

The  30-day  “expedited review”  was announced in a  March  30  internal memo from Attorney General Merrick Garland, who directed all Justice Department components to prioritize the investigation and prosecution of hate crimes and related incidents. The memo emphasized the particular importance of countering what the Attorney General described as a “disturbing trend” in reports of violence against members of the  Asian  American and  Pacific  Islander  (AAPI) community since the beginning of the COVID-19 pandemic. Hate crimes committed in the greater St. Louis metropolitan area fall under the purview of the U.S. Attorney’s Hate Crimes Task Force. Led by the U.S. Attorneys for the Southern District of  Illinois and the  Eastern  District of  Missouri,  the  Task  Force is comprised of more than  90 members of community organizations and state and federal agencies devoted to the ongoing work of defeating racism, bias, bigotry, and unlawful discrimination in all its forms. Since 1997, the Task Force h  s coordinated multi-faceted responses to hate crimes and bias incidents in the St. Louis region. 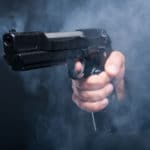 Shooting gun conviction for Illegal Alien
An illegal alien has been convicted guilty by a federal jury in East Saint Louis.

A Man from Maywood Sentenced to 10+ Years for Drug Trafficking
ROCKFORD — A suburban Chicago man has been sentenced to more than ten years in
Tags: Fairview Heights, Hate Crimes