The RAEDC has released the follow-up survey in March 2021 to manufacturers which will allow us to gauge the need for support and information as well as provide a comparison for the first survey released in March 2020.

The survey was designed to assist the RAEDC with developing programs for our region’s business community. There were a similar number of respondents to each survey, so the responses reflect a proportional comparison.

Estimated Business Activity
The total reversal in responses from March 2020 to March of 2021 clearly demonstrates an increased positivity and expectations from regional companies. As a secondary question in the survey, it was revealed that 23% of the respondents have plans for expansion within the next two years.

Reduced Revenue Resiliency
Companies in March of 2021 are clearly in a more stable financial position than in 2020 with companies being able to sustain financial viability from 90 days to a year being the largest groups instead of 0-30 days that were seen in March 2020. This increased stability can be attributed to multiple factors including refinancing of existing loans, government programs such as the Paycheck Protection Program (PPP) and the CARES Act, as well as additional lines of credit.

Supply Chain Disruption
There is clearly still a concern with manufacturing supply chains however, this extends into other industries as well such as lumber and computer chips. This provides an opportunity for companies to expand their services to bridge these gaps or find new companies that can provide the required products.

Return to Work Plan
This question was not asked in 2020 but clearly demonstrates the impact COVID-19 has had on the thought process for work locale within the manufacturing industry. 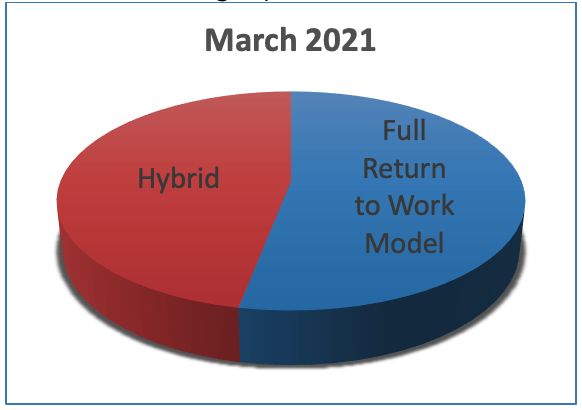 Cybersecurity as a Priority
This question was not asked in the 2020 version of the survey but clearly demonstrates the need for increased awareness and investment of cybersecurity amongst manufacturers. Especially those that are contractors or subcontractors for Department of Defense work. The respondents’ collective average is at 70% with 100% being the most important.

There is much work to be done in the Rockford Region, however, the increased financial resiliency of our companies, the refocused efforts for entrepreneurs and start-up support, and the ability of our companies to redesign supply chains and products demonstrate the resilience and innovation that has led to the transition from aerospace manufacturing to medical manufacturing, production of gears for the Mars Rovers, every commercial aircraft having a part or system made or designed in Rockford, and the base for the Giant Magellan Telescope being made right here.

2021 SelectUSA Summit Attracts Global Investing to Illinois
A delegation from the Department of Commerce and Economic Opportunity, Intersect Illinois, and 17 economic

Former City of Rochelle Employee Pleads Guilty to Fraudulently Obtaining at Least $150,000 From a Non-Profit Business Association
A former employee of the City of Rochelle, Ill., pleaded guilty Tuesday to wire fraud for fraudulently

Healthcare Systems Open New Facilities
In the past few weeks, the Rockford Region has witnessed the expansion of our healthcare

Man Charged for Allegedly Setting a Retail Business on Fire
On Thursday, a Rockford man was arrested on a federal arson charge for allegedly setting