A flight of Alaska Airlines was diverted to the Minneapolis St. Paul International Airport. The crew members and some passengers got sick due to the foul odor which compelled the flight to divert its direction towards the Minneapolis St. International Airport to land on. The flight had the route from Chicago to Seattle. It landed at the unscheduled location at 7 p.m. on Wednesday due to an unfortunate incident. The flight got cancelled after the incident and the passengers were sent to the Seattle on some other planes.

Patrick Hogan, Spokesperson of Minneapolis St. International Airport, told, “The odor was quite similar to the smell of burnt plastic but the real source of smell is still to be identified”. Some passengers were finding it difficult to breath due to foul odor. He also confirmed that four people were taken to the hospital after the landing of flight on the unscheduled airport. Eight other passengers were medicated at the airport and they got recovered there. There were 144 passengers on the flight number 51 which was diverted from its original route.

The flight 51 was heading towards Seattle when a foul odor started to appear in the plane which caused serious issues for the passengers and crew members in term of breathing. The flight was diverted from its original route and landed at the Minneapolis St. Paul International Airport at 7 p.m. on Wednesday. The passengers were then completed their journey via other flights as this flight 51 was cancelled. The original source of foul odor has not been identified yet. The flight was carrying 144 passengers who were travelling from Chicago to Seattle. Airport management sent four passengers to the hospital as well who were not feeling well. Eight other passengers are medicated at the airport and their condition got stable there. The officials are looking for the actual reason for the spread of odor in the Alaska Airlines flight. 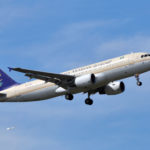 2-year-old died in Saudi Airline plane due to sudden health problem
A 2-year-old child lost his life in a Saudi Airlines plane in an unfortunate incident.

A Man from Maywood Sentenced to 10+ Years for Drug Trafficking
ROCKFORD — A suburban Chicago man has been sentenced to more than ten years in
Tags: Alaska Airlines, flight, unfortunate incident