The sports complex project was completed in four years with the amount of $4.8 million. Dr. Joyce Kenner, the principal of the school, said, “The field has been in making for last 10-15 years.” The principal added that it was a privilege for them to name the field after the former First Lady. Michelle Obama embodies to stay fit and being involved, Kenner said.

Michelle Martin, a classmate of Mrs. Obama, said, “She was always very active, so I am not surprised they would want to name the facility after her.” Mrs. Obama was really excited about the new complex but she could not come in the ribbon-cutting ceremony. She was out of the town, according to the sources. The old field only had a baseball diamond. The new complex, Michelle Obama Athletic Complex, has more facilities and it was funded by tax-increment financing dollar. 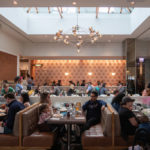