The US withdrew from the Intermediate-Range Nuclear Forces Treaty on August 2. It has tested a medium-range cruise missile weeks after it withdrew from the treaty. The missile was launched off the coast of California, according to the Pentagon. The Pentagon said that it was a successful missile test.

Russia accused the US of escalating military tensions. The US claimed that Russia violated the INF Treaty. Russia denied the claim of the US. The collapse of INF could enhance the race of arms, according to the experts. The collapsed treaty banned the missiles with a range of 500-5500 kilometers. The Pentagon said that the missile, which was launched, was not nuclear-equipped. The missile was launched from the San Nicolas Island. The island is controlled by US-Navy.

The US Defense Department said, “The test missile exited its ground mobile launcher and accurately impacted its target after more than 500km of flight.” The data collected from this test will help the future capabilities of the intermediate-range missile of the US. Russia said that it was a cause of regret. Sergei Ryabkov, the deputy foreign minister of Russia, said, “The US has obviously taken the course of escalating military tensions.”

Russia was accused of violating the terms of the INF Treaty by the US and Nato. US and Nato claimed that they had the evidence of the violations. President Putin denied the allegations of the US and said, “It is a pretext of for the US to leave the pact.” Donald Trump gave the deadline of August 2 for the withdrawal of the US from the treaty. Mike Pompeo, the US Secretary of State, said, “Russia is solely responsible for the demise of the treaty”.

The demise of the treaty has enhanced the concerns as it can lead to a new arms race between the United States, Russia, and China. Antonio Guterres, the UN Secretary-General, said, “An invaluable break on the nuclear war has been lost. This will heighten the threat.” 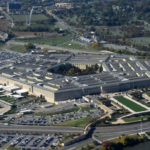