North Carolina has been hit hard by flooding and heavy rains. Six people have died so far in the state due to the flash flooding. According to the local news reports, at least 30 campers were rescued from flash flooding by the rescue crews on Thursday morning who were stuck at a campground about 60 miles northwest of Charlotte.

Kristi O’Connor of WBTV tweeted, “Mooresville Fire tells me at least 23 people have been rescued from flood waters at Hiddenite Family Campground in Alexander County, North Carolina.” Later on, O’Connor wrote that 33 people were rescued by the Mooresville Fire Department. Mooresville Fire Chief told the media that two people lost their lives at the camp. At least three persons including two adults and one baby were missing.

At about 16 miles north of Raleigh, an 11-year-old boy was found drowned. The office of the Wake County Sheriff said, “Witnesses believe the child was playing near an overflowed creek when the accident occurred.” The roadways were shut down due to a mudslide in Burke County.

Several cars are submerged in the Charlotte metro area. The authorities urged drivers to stay away from the flooded roads as they rescued many from the submerged cars. The rescue officials were called when flood waters rose in Charlotte to rescue at least 140 people from a charter school. Charlotte Fire Department tweeted, “CFD Units are currently on scene in the 9500 Block of David Taylor Dr. Heavy flooding has led to the evacuation of a Charter School.” The rescue units saved 143 people during this operation. No injuries were reported.

Chicago Weather: Rain moves through area Monday
Rain showers moved through the Chicago area Monday, but the possibility of severe storms was 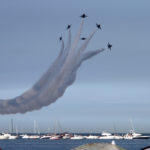