The study said that the tax credit needed to be encouraging for the taxpayers to take advantage. The low-income parents get a rebate on their taxes through the EITC. The EITC applies to the federal and some state taxes. In 2018, the Illinois income tax has an 18 percent match of the federal EITC. The working parents earn up to $55000 through the EITC in Illinois.

The low-wage workers can improve their living standards through the combination of the EITC and minimum wage. The study did not find any connection between raising the minimum wage and lowering employment. The EITC only provides rebates to those who work. The report said that the EITC encourages people to work as it is for the working people. In the 1990s, the tax credit increased the labor-force participation of single mothers.

The EPI study stated that the current minimum federal wage was too low for the workers to support their families. Illinois has increased the minimum wage and it is working on bringing the minimum to $15 in 2025. The report states, “The EITC can raise earnings above the floor guaranteed by the minimum wage.”

Study says rise in minimum wages could prevent suicides
New research has been published in the Journal of Epidemiology & Community Health. The research 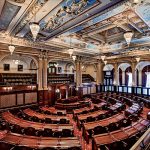