President Donald Trump tweeted on Thursday that White House was continuing to review the possibility of commuting the prison sentence of Rod Blagojevich, former governor of Illinois.

Trump said in a social media post that the sentence of Blagojevich was a serious one. He also confirmed that his staff was looking into the possibilities of commuting it. Blagojevich was sentenced 14-year in prison by the court. Trump said, “He has served 7 years. Many people have asked that I study the possibility of commuting his sentence in that it was a very serious one.”

Trump announced that the White House staff was continuing the review of the matter. President Trump told the reporters on-board Air Force One, “I am seriously considering commuting his sentence.” Trump supported him while talking to the media that Blagojevich was treated unfairly. Patti Blagojevich, the wife of Rod Blagojevich, continuously urged the Trump administration to issue a pardon or commuting order in the case of her husband.

Mr. Trump praised the efforts of Patti Blagojevich. The former governor of Illinois was convicted of selling the Senate seat of Barack Obama. He was sentenced 14-year in prison. Several appeals have been made after the sentence of the former governor including a supreme court appeal. All of the appeals were rejected. President Trump has announced that he would consider commuting the sentence of Blagojevich. 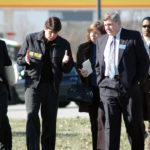 Trump says his administration still looks into Blagojevich’s commutation
Trump talked about the commutation of the prison sentence of the former Illinois governor, Rod