Just think for a second that Chicago has less crumbling infrastructure, fewer congested roads and more extensive transit and bicycling options. Just imagine the Windy City with local transportation to match its world-class stature as a place to live, visit and do business. Now come back to reality.

Chicago’s mayor Lori Lightfoot has few good options to find revenues to pay for improving the infrastructure. In the wake of Illinois Gov. J.B. Pritzker’s capital plan, steps to boost fuel, parking and real-estate transfer taxes appear to be long shot aspects. Raising residential property taxes would create much pushback and sales taxes cannot be tempered as well as they are among the highest in the country.

There is a positive aspect for Lightfoot in the ‘congestion pricing’ area. Chicago could be transformed into a Smart City using the incentive pricing which could improve quality of life. Funds could be generated for street enhancements, transit service, cycling and walking improvements, and innovations in mobility using fees to manage congestion within the city and on certain expressways.

Chicago has lagged other cities for too long in using variable fees to manage its roads, rails and parking. Congestion pricing have been adopted by many metro regions. Cities like Los Angeles, Philadelphia and Seattle are actively considering it for downtown streets. There have been calls by many departments to Lightfoot to consider using Congestion pricing.

Active Transportation Alliance, Center for Neighborhood Technology, Chicago Council on Global Affairs, Metropolitan Planning Council, Shared-Use Mobility Center and ride-share provider Via as well as University of Illinois at Chicago researchers are all in favor of using Congestion pricing. 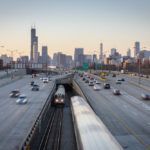