Chicago Mayor Lori Lightfoot has accused stores of not taking adequate measures to prevent themselves from being victims of crime.

During a crime summit on Monday at the University of Illinois in Chicago, Lightfoot said she was disappointed with stores on Michigan Avenue, a popular shopping and tourist destination. She said they were not making security a priority and taking adequate measures to prevent theft.

Lightfoot said: “Some of the retailers downtown in Michigan Avenue, I will tell you, I’m disappointed that they are not doing more to take safety and make it a priority. For example, we still have retailers that won’t institute plans like having security officers in their stores.

“Making sure that they’ve got cameras that are actually operational, locking up their merchandise at night, chaining high-end bags. These purses seem to be something that is attracting a lot of organized retail theft units.”

Newsweek has contacted the Chicago Mayor’s Office for comment.

The President and CEO of the Illinois Retail Merchants Association, Rob Karr, disputed these claims by Lightfoot. Speaking to Fox Business, he said it was misinformed to suggest stores needed to do more for their protection.

He said: “The comments that retailers need to do more are sadly misinformed. I think it ignores the fact that retailers spent hundreds of millions of dollars every year on security.

“We’re not going to put the entire store behind glass cases or under lock and key. Retail doesn’t work that way. We have a fine line to walk. I don’t think the mayor wants a line of armed personnel in every store.”

On Tuesday, White House press secretary Jen Psaki addressed the spate of smash-and-grab robberies in major U.S. cities. Psaki was asked by Fox News to respond to the remarks by Lightfoot, and to comments by Alexandria Ocasio-Cortez (D-NY) who cast doubt on claims such crimes were widespread.

She said the White House “don’t agree” and highlighted the Biden administration was committed to working with the Justice Department and the FBI in providing resources for local police departments to deal with smash-and-grab crimes.

She said: “We have seen some of these extremely disturbing videos showing retail theft. State and local leaders like [California] Governor Gavin Newsom have identified this as a serious concern. We agree. That’s the reason why we have sent additional support from the FBI providing additional assistance.

“It’s one of the reasons why the president and members of our administration have been longtime advocates for supporting and funding the COPS program. I think his record speaks for itself on this.” 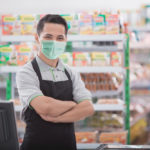