The National Labor Relations Board (NLRB) has taken three decisions on December 16 and 17. All of these decisions are appreciated by the employers and they consider it win for them. The NLRB has restored the employer’s right in the first decision. The union dues will not be deducted and remitted after the expiration of the collective bargaining agreement.

The expiration of the contract will cease the “dues checkoff provisions”. The Board took a decision on Monday and overruled Lincoln Lutheran restoring the employer’s right. The Board took a decision on Tuesday, December 17, in Apongee Retail, 368 NLRB No. 144 (2019). The decision held that employers rule mandating confidentiality with respect to the ongoing investigations at workplaces.

The Board also made another decision on Tuesday in which the 2014 Purple Communications decision was overturned. According to the decision, the employer can legally prohibit employers to use company email and IT services for non-work purposes. The decision stated, “there is no statutory right to employees to use employer-provided email for non-work.”

The employers are still prohibited to discriminate against the Section 7 activity. The activities protected by Section 7 cannot be legally prohibited by employers. However, employers can maintain facially neutral bans on the use of emails for non-work. The employers considered these decisions helpful for them and they appreciated the Board for taking these three crucial decisions. 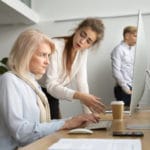