In yet another mass shooting in the U.S, the Texas City of El Paso was the latest city to experience another horrible shooting, killing twenty people and injuring at least twenty-six others. According to a report by Gun Violence Archive, the United State of America has now experienced more mass shootings than the number of days we have in 2019 so far. As at 5th August 2019, the 217th day of the year, the U.S has experienced 251 mass shootings. Going by Gun Violence Archive definition, which states that any shooting incident that involves the shooting of more than four people excluding the shooter qualifies as a mass shooting.

So far out of the 251 mass shootings in 2019, there have been five high-profile cases in the last eight days alone, which include:

The Virginia Beach shooting that left twelve dead and four wounded has been the deadliest mass shooting in 2019 until the El Paso attack. From the archive, Gun Violence Archive has recorded a staggering 33,028 shootings so far in 2019 as at 4th August 2019, which has resulted in 8,734 reported death as well as 17,308 injuries. The last time mass shootings outnumbered the numbers of days in a year was in 2016 with a recorded 382 mass shootings overall. The following years were quite close with 2017 witnessing 346 mass shootings and 2018 having its own share of 340 mass shootings.

In a country where the issues of gun violence are increasingly becoming an issue of grave concern, another gunman went on a rampage in the city of El Paso in Texas. We have here the chronological order of the events: 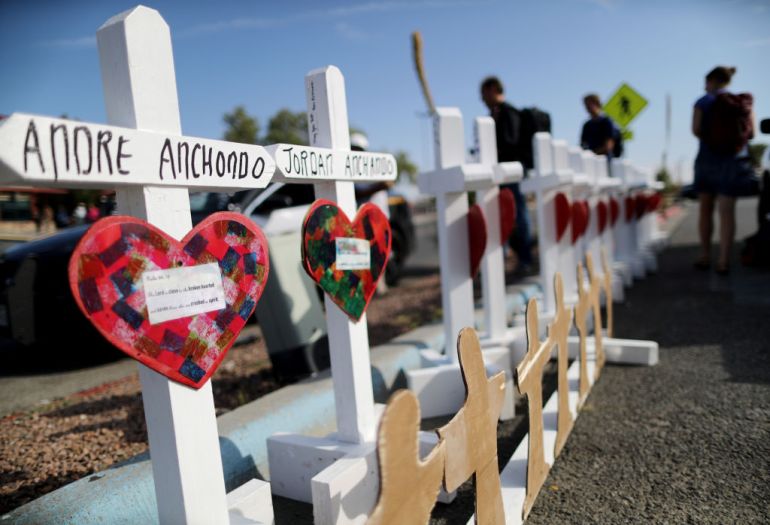 The Shooter and His Strategy

The shooter has been identified as Patrick Crusius aged 21 years old from Allen a Dallas suburb 650 miles away from El Paso in Texas. According to a press release from the suspect grandparent, he is said to have lived with them as he attended junior college at Collin County College. The college also confirmed in a statement that suspect had attended the college between 2017 and 2019. He is said to have moved out of his grandparent house at about six weeks ago only spending a few nights there whenever the grandparent is out of town.

The suspect is believed to have held an anti-migration political view terming the Hispanic population as an invasion of America. In a manifesto believed to have been posted by the shooter to an online message board with right-wing rhetoric in which he claimed to be “defending his country from cultural and ethnic replacement” brought on by the Hispanic population. He also expressed support for the Christchurch terrorist that killed 51 people in New Zealand earlier this year in March.

The four-page manifesto which was posted 20 minutes before the shooting started was filled with hate message, white nationalist agenda, and racist anti-immigrant views. In the document, the suspect express fears of the growing influence of the Hispanics in the area, which he believed could gain a political stronghold in the state. At the same, he described how long it took to plan the shooting and the weapons involved.

Investigation of the Shooting Event

According to initial reports, the suspect was said to have carried out the shooting with a rifle, and the FBI has asked anyone with useful information in the form of pictures or videos to come forward to aid the investigation. The District Attorney for the El Paso County Jaime Esparza stated that the shooter will be charged with capital murder with the authorities seeking the death penalty for the crime. Additionally, the U.S. Attorney John Bash of the Western District of Texas stated that the Justice Department is considering the options of federal hate crime and federal firearm charges that also has the possibility of applying the death penalty. Bash further stated that the crime is been treated as an act of domestic terrorism as the case seem to fit the statutory definition in place for domestic terrorism. In response to recent attacks in California, Texas, and Ohio, the FBI has embarked on a threat assessment across the country so as to prevent future attacks of similar magnitude

The Reaction of the Government of the US

President Donald Trump called the suspect a coward, he tweeted his condemnation of the act and offering his heartfelt thoughts and prayers to the victims of the incident. He offered his condolences to the people of El Paso. Although, the president was criticized for failing to speak on gun control and the nature of the crime. However, he pledged his support for the state governor, Greg Abbot, saying the federal government will work with the state and local authorities as well as law enforcement on the incidence.

The U.S. Rep Veronica Escobar representing El Paso had also decried the incident calling it a massacre. While the Mayor also rally the town to rise above the deadly act of violence, evoking the spirit of unity and compassion in the community. The governor had also voiced a similar message in his tweet.

Lori Lightfoot, mayor of Chicago, and JB Pritzker, governor of Illinois, blamed Trump’s rhetoric for the mass shootings in the US. Lightfoot said, “Trump has blown the racist dog whistle.”

Meanwhile, the Mexican government as announced by the foreign secretary Marcelo Ebrard has stated that they will open legal proceeding over the killing of 7 Mexico nationals in the incident. However, the exact nature of the legal proceeding is not known.

Charges on the Shooter

In less than 24 hours after the El Paso mass shooting, another mass shooting went down in Dayton’s downtown, Ohio, which left 9 dead and 27 injured. According to reports, the shooter was shot dead in an encounter with the police. The shooter was reported to have acted alone, starting the shooting using a long gun on the street.

Unlike the El Paso shooting, the motive of the shooter in Dayton is not yet known and he can’t be charged to court or face any charges or penalty having been killed in a police encounter. President Donald Trump has also tweeted his support while the governor of Ohio express his sadness and offered to help with the investigation into the crime with appropriate state support. The shooter has been identified by law enforcement as a man named Connor Betts in his 20s. The law enforcement has been praised for their quick response, which prevented the incident from escalating further and resulting in more death. In response to both attacks, the president had called on both the Democrats and the Republicans to consider introducing mandatory background checks on every gun purchases in the country.

Numerous Gunshot Victims in Chicago
On Monday, July 20, 2020, at around 7:50 p.m., police and firefighter/paramedics responded to a

Shooting in suburban Chicago hospitalizes 4 people
4 people got hospitalized after a drive-by shooting in Illinois on August 9. A 24-year-old

Police apprehends an armed man at VA hospital
An armed man opened fire inside and outside the Jesse Brown VA Medical Center. Police