CTA will begin the work on the reconstruction and modernization of the Red and Purple Lines this fall. The work includes building more accessible stations and a rail bypass on North Side of Chicago. CTA hosted an informative session this week in Lakeview for the concerned residents.

The officials of CTA told that one more session is also scheduled in Lakeview. The work on the Red-Purple bypass will start in September, according to the CTA official. It is the major part of the CTA’s rail project. The project has a budget of $2 billion. The tracks of the rail network in Chicago are almost 100 years old. Tammy chase, the spokesperson of CTA, said, “The rail junction that we are rebuilding is 112 years old, so obviously it was built in a much different time in the city of Chicago.”

The Red-Purple bypass is a mega-project of CTA. It will carry Brown Line trains up and over the Red and Purple Lines. The bypass will improve the commute time and it will also reduce the overcrowding on the trains and platforms. CTA provides information to the people who will get affected during the construction process.

Chase said, “There will be alley and steel closure occasionally and it is going to be noisy”. He added, “We are here to educate the people who live and work here what to expect.” In this project, the Lawrence, Argyle, Berwyn, and Bryn Mawr stations will be renovated. The project also faced some criticism as many people think that it is unnecessary.

The opposition voices have turned into support now. Ellen Hughes, a member of the Coalition against Belmont Flyover, said, “I will work with the CTA to make sure neighborhood residents are treated right.” She promised the community that she will continue her struggle for the rights of the community. Hughes said, “We have developed quite a working relationship with CTA and CTA has been good to their word.” 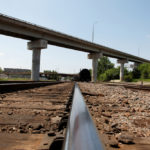 National Coffee with a Cop Day in Naperville: Everyone Invited on Oct. 5
Citizens are invited to enjoy coffee and conversation with members of the Naperville Police Department
Tags: CTA, modernization, Purple Line, reconstruction, Red Line