Cardinal George Pell has been removed from his position as in charge of finances from the Vatican City.

He was the third most powerful person in the Vatican before his discharge.

There is uncertainty of his removal but reports are his position had already expired at the holy city.

He was appointed by Pope Francis himself to see the finances in 2014 which is usually a five-year tenure.

The Vatican Spokesman affirmed that Pell was no longer the Prefect of the Secretariat for the Economy through a tweet.

George Pell was Pope Francis closest advisors but was found to be guilty of sexual assault. He was found guilty of sexually assaulting two choirboys making him the senior most person of the Catholic cleric to be convicted of such hideous crime.

He was convicted by a unanimous jury of the actions he done in 1990s.

The Vatican was ready for the worse as he was forbidden to use his public exercise.

There are serious questions about what is going to happen now.

The case of George Pell was the most discussed topic in last week’s summit on clergy sexual abuse in Rome and people are not happy what was going on.

This case was a major dark spot on the Catholic Church which is thought as one of the most powerful institutions in the world.

Many people are waiting for what will happen and what measures will be taken with such cases.

Pope Francis has called for strict actions against these crimes to humanity.

Pope Francis had removed previous figures from Vatican advisory group on account of such actions.

Pope Francis can’t take quick action as he has more than 5000 bishops under the helm.

Some people are saying that George Pell will not have any support from Vatican City due to history within the City and his history of such actions. 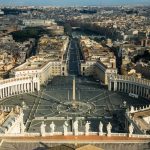 Resignation of UK ambassador: The scandal with the correspondence of the ambassador
Sir Kim Darroch, who has been serving as the ambassador of UK from the USA