The harvest estimates for corn and soybeans have been lowered by the United States Department of Agriculture (USDA). The lowered estimates were not as low as the markets expected. The prices of corn and soybeans fell after the announcement of the USDA. Karl Setzer, a commodity risk advisor at the AgriVisor, said, “We dropped hard. There is a very definitive line between what the trade considers old crop and new crop.” Setzer talked to the RFD Radio Network.

FarmWeekNow.com published a story that revealed that the corn prices declined 12.25 cents in July while and 4.75 cents in September. The US farmers have been suffered due to the trade war of Trump against China. The current drop in the prices is a pinch of salt to the farmers’ wounds. The USDA released the Crop Production Report on Thursday. The department gave predictions in the report.

The corn production was projected to drop from 14.4 billion bushels to 13.8 billion bushels on the national level. Record production was measured in 2016 but the product fell in the last three years. Ami Heesch, a CHS Hedging’s market analyst, said in a teleconference, “Everybody was looking for a friendly corn number but USDA actually increased yield a freckle.”

Heesch considered the report positive but she considered it unfriendly due to the current market’s look. The Illinois soybeans production was projected to fall from 4.4 billion bushels to 3.6 billion bushels in the report released on Thursday. The Illinois soybean harvest was expected to fall from 10.5 million acres last year to 9.9 million acres this year. 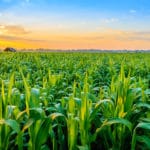 Rain, snow halts corn comeback
Rain and snow once again delay the harvest of corn as more than half of

Jackson County Reports Twenty-Three New COVID-19 cases
In the past 24 hours, 23 Jackson County residents have been confirmed of COVID-19. The

For Third Consecutive Day, US Reports Over 50,000 New Coronavirus Cases
Americans will find many closed beaches and scarce Fourth of July fireworks, but authorities fear

Mild Illness, Fever Tendency in Babies with COVID-19
Infants under 90 days of age who tested positive for COVID-19 tend to be well,