While we are all yearning  for a return to ‘normalcy’ soon, there are moments and events that still manage to remind us that we have shifted to a new normal, if you will. Last May EXPO CHICAGO’s Tony Karman announced that EXPO would be taking an early, preemptive step to move the fair from its usual September dates to April 2021. This seemed, at the time, to be abundantly cautious but prudent, and an April in-person was totally doable.

Well, a year goes fast, even when it’s rough. EXPO’s team has been busy preparing for a strong virtual showing, one that showcases contemporary and modern art features presentations of available artwork from over 80 international galleries, Art Dealers Association of America (ADAA) members, EXPOSURE galleries, and Special Exhibition participants.

The online iteration of EXPO includes the usual line up of best feet forward, even in this virtual format, with strong offerings from local participants as well as from international exhibitors and partners. EXPO CHGO ONLINE will offer a series of dynamic discussions, film screenings (presented in partnership with Daata), exhibition tours, and performances reflecting Chicago’s interdisciplinary arts scene. Programs taking place during EXPO CHGO ONLINE will be free and open to the public April 8-12 via the EXPO CHICAGO microsite. Each gallery has also been invited to present one artwork that contributes to a broad rethinking of the environment, to be exhibited within a focused programming section.

Just a few highlights of the exhibition include:

• Friday, April 9 Humberto Moro, deputy director and senior curator at the Museo Tamayo and EXPO CHICAGO’s EXPOSURE curator, leads a tour of EXPO CHGO ONLINE. Moro will present a selection of works from a range of galleries featured in the EXPOSURE section of the digital exposition, in addition to key pieces from emerging artists throughout the fair.

• Saturday, April 10 – Corbett vs. Dempsey presents the fifth incarnation of its Sequesterfest series, this time as part of the program for EXPO CHGO ONLINE art fair, presented in the Experimental Sound Studio’s miraculous Quarantine Concert series, which has been streaming live music and audio art directly into people’s homes since the outbreak of the pandemic.  Sequesterfest 5 singles out three members of Wilco – singer and guitarist (and most recently author!) Jeff Tweedy, guitarist Nels Cline, and drummer Glenn Kotche – inviting them to show how a few seasons off-road adds up.

• April 12 The Arts Club hosts a panel, For and From the Void: Artists on Making in an Empty Institution. Unable to host audiences en masse for performances in the actual building, The Arts Club of Chicago opted, during a pandemic-induced hibernation, to explore the generative potential of emptiness. The club invited three artists in three disciplines to ponder the question, “What does one do with an empty institution?” Musician Angel Bat Dawid, Dancer Jasmine Mendoza, and Theater maker Kurt Chiang (with their collaborators Isaiah Collier, Keaton Fox, and Livia Chesley respectively) took on the task of making art for and from a void. The three lead artists, with programmer Jenna Lyle, discuss their discoveries from the process and the inherent contradictions in the original prompt: is an arts institution ever really empty?

• Locally, Gray Gallery will be highlighting artist Ellen Lanyon with a solo exhibition of paintings from the late artist’s, sold to benefit the School of the Art Institute of Chicago.

The Arts Club of Chicago opens its exhibition featuring the work of Turner Prize-nominated artist Hurvin Anderson, Anywhere but Nowhere.

Of course, if you’re local you can visit area galleries all week, as all are open at least by appointment.

Enjoy this version of EXPO. Though it is the new normal for now, it’s a strong connection to what we used to experience in years past and what we can look forward to again, hopefully some day soon.

EXPO CHICAGO to Move from September to April 2021

Tony Karman on Fall without a Fair, Sept 2020 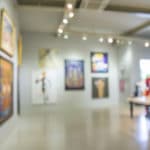 Many shows open in Chicago this weekend: Do not miss them
Chicago is going to host an art fair weekend. Many gallery shows would open in
Tags: Art Dealers Association of America, EXPO CHICAGO, galleries, special event