Roy sailed Gold Coast of France, Sardinia, Corsica, and Mallorca in Spain. He said that he was a member of an international team on the yacht and he was the only cook. He was responsible for cooking food for the crew members and guests. Roy said that he enjoyed different cultures and personalities while performing his job. He has now spent almost 20 years abroad as a culinary professional.

Chef Mike McGreal, the chairman of the Culinary Arts Department at JJC, said, “I was impressed with Adam back in 1997 when he was a culinary arts student.” Roy showed professionalism during the annual gala dinner of the program. McGreal said that he was impressed with the professional work of Roy at the event. After leaving college, Roy went on to gain international experience in different languages, cuisines, and cultures.

He started his career as a cook and then went on to become an executive chef at various hotels and resorts in the US, Europe, and Asia. He has spent two years in Europe in the hospitality industry. He worked as a cook on a cruise ship for two years. He also has an international experience of working as an executive chef in Asia for 16 years. He is currently studying online to get his master’s degree from Florida International University.

Roy demonstrated some Chinese and Thai dishes for the current JJC students of Culinary Arts. Roy said, “Make the most of every experience as it will pay itself off in the future.” Roy chose a hard path in his career that was truly dependent on building the relationship. Roy said that the things he learned at the JJC helped him a lot during his career. 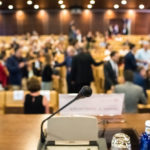