A dump truck crashed into three school buses in the northern suburbs on Thursday. Several children were hurt in the incident. The school buses were carrying almost 150 children who were taking part in a summer day camp.

Chris Covelli, the spokesman of the Lake County’s sheriff’s office, said that the buses slowed down for traffic near River Road and Route 137. He added that a truck struck the back of a school bused as it was unable to slow down by the driver. The first school bus pushed into the second one and the second one pushed into the third one. A 44-year-old driver from Elgin was driving the truck.

The children were taking part in a summer camp and the buses were carrying them from the North Suburban YMCA Summer camp in Northbrook, according to the sheriff’s office of the Lake County. The counselor and the campers were injured in the incident. 17 campers and counselor were taken to the area hospitals as they received non-life-threatening injuries. The paramedics examined the rest of the campers on the scene.

The truck driver and the bus drivers were uninjured. There was a total of 144 campers and consolers in the buses. The hood and front bumper of the truck was damaged. A windowpane of one bus was also missing from its rear end. Covelli said that the truck driver might receive the citations. The children and the consolers were headed back to the camp as the YMCA officials worked with a bus company.

The incident took place near the River Road and Route 137 at about 11:45 am. Three buses slowed down due to the traffic. A truck driver could not slow down and crash into the first bus from behind. The first bus pushed into the second one and the second one was pushed into the third one. 17 children and consoler were injured in the incident and they were transported to the area hospitals. The truck driver will receive citations related to this incident. 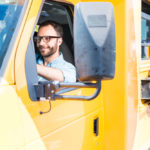 Enrollment and Transportation Center of Freeport School District to host Bus Driver Hiring Open House
The event is organized to meet the drivers’ shortage in the district. The Enrollment and