Three people were present on the boat when it overturned in Michigan Lake on Thursday. Two people got injured in the incident and they were rescued. One woman lost her life in the incident occurred near Belmont Harbor on the North Side.

Chicago police and Chicago Fire Department said, “We received a call at about 2:00 am about the capsizing of a sailboat in the Lake Michigan. Emergency crew responded quickly to reach the scene for helping the people out of water”. They said, “The sailboat was crashed with the dock and capsized near the 2200 block of North Lake Shore Drive”.

Police told the media, “One woman, 31-year-old, and one man, “28-year-old, were rescued safely from the water and they are in a good condition”. The third woman, 27-year-old, was taken to the Masonic Medical Center of Illinois in a critical situation. There were less chances of her recovery as she was in a serious condition, according to the police. The third woman later died in the hospital and the police has confirmed the death.

The details and cause of her death has not been shared by the medical examiner of the Cook County. The boat was carrying three passengers when it crashed into a dock. It was a sailboat on which two women and one man were traveling. The crash capsized the sailboat and it overturned. Police and Chicago Fire Department received the call about the incident happened near Belmont Harbor.

The emergency crew responded to the call and reached the 2200 block of North Lake Shore Drive. The crew saved the life of two people as they were rescued and they are in a good condition now. One woman lost her life in the incident, according to the police. The woman was brought to the area hospital in a serious-to-critical condition. She could not breath long and died later in Masonic Medical Center of Illinois. 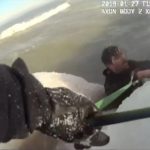 Chicago man falls in Michigan Lake while saving his dog, rescued by police human chain
The man was trying to save his 9-month old puppy and unfortunately, he fell in